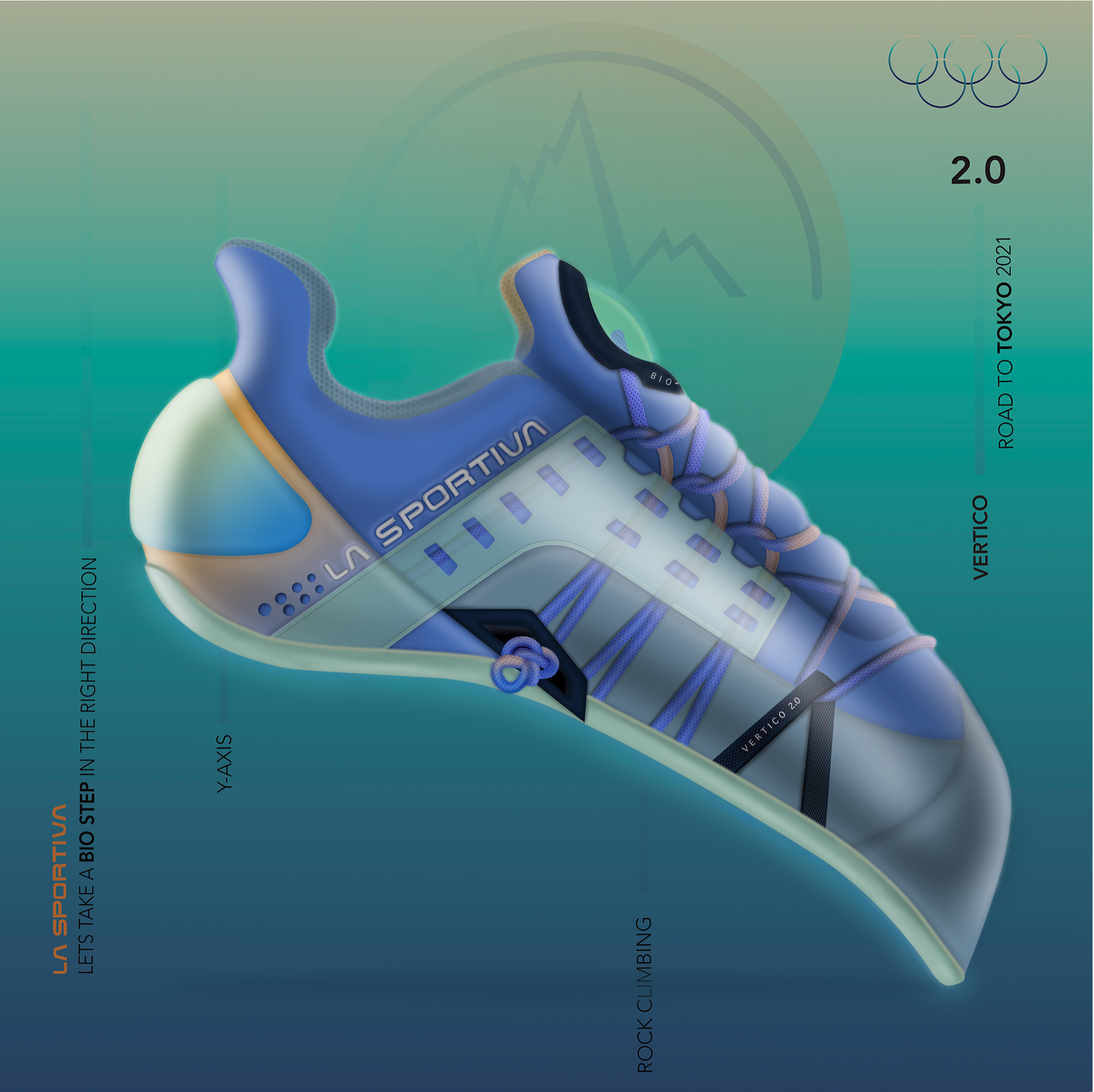 VERTICO 2.O FUTURE FRAGMENT is a rock climbing shoe designed for athlete ADAM ONDRA for his TOKYO 2021 Olympics debut in sport climbing.Which originally I conceptualised in 2019 inspired by his hardest climb CHANGE . We are living in unprecedented times & normal rules no longer apply.With the entire world looking at Olympics as a beacon of hope,served as a creative trigger to upcycle my design not only to enhance the performance of the athlete but also as a symbol of optimism , solidarity & unity in all of our diversity .Vertico 2.0 is based on the concept of circularity design-PDF for details

Bio Hi my name is Disha Vaid , I am a graduate in Fashion Design and an aspiring footwear designer from Mumbai , India . My design philosophy is designing Consciously with an awareness of the potential long-term & unintended consequences of what we design on our present & future.
In future I aspire to focus on designing footwear & apparel which enhances athlete's mental performance eventually triggering his physical performance,Influenced by DNA
I am a Team player ,highly professional & a Positive Thinker. Besides this I am an avid traveller, I do yoga , learn guitar & French & I love to doodle.

Other prizes 1- WORLD SNEAKER CHAMPION 2019 -Top 4 In The World in footwear category. Although I wasn't awarded but I consider it as one of my biggest achievement to represent my country at an international platform & reach the TOP 4 level with the support of people from all over the world. 2-Won the ASICS TIGER CMD prize , an online competition by PENSOLE FOOTWEAR ACADEMY ,portland, USA. 3-Won the Highly Commendable most appreciable Design Award . 50 participants were shortlisted from 67 Countries which participated in the International Paradigm Shift Competition 2000, organised by the best design college in India ,National Institute Of Fashion Technology, New Delhi ,India. 4-Awarded Second Position in Inter College (Professional) floor painting competition organised by Chandigarh Arts College,India. 5-My team was Awarded first position in Group Float making competition organised by Chandigarh Arts College,India. 6-Was honoured by my college , with the Best Performance in Craft Documentation & Internship Presentation & submission of reports on the sacred tribal pithora paintings of JHABUA tribe & traditional method of hand weaving chanderi sari ,from Madhya Pradesh , India 7-Won the Scholarship For B1 level , in national level French writing competition organised by ALLIANCE FRANCAISE , India..